A special thanks to Amberjack Publishing and NetGalley for connecting me to this delectable read by Victoria Brownlee!

From start to finish, Fromage a Trois, promises to transport readers to the glamorous streets of Paris, and it fully delivers. 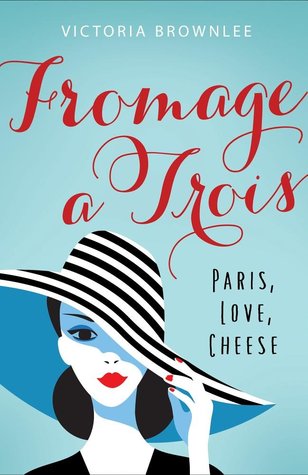 Ella finds herself recently dumped, stuck at a job that has no foreseeable future, and soon to be thrust out of her glamorous Melbourne apartment. Heartbroken and fed up with her complacent life, Ella makes the decision to book a one way ticket to Paris for the adventure of a lifetime.

Her expectations of finding a glamorous job, apartment, and new love are dashed by the harsh realities and obstacles that come with being an expat. But still, Ella reacquaints herself with the thing that initially sparked her love of Paris: cheese.

Stumbling into a traditional French fromagerie, Ella sets upon a journey in France that ends up being quite different than the mental picture she initially held in her mind. And along the way, she finds herself again.

Fromage a Trois is a charming read bursting with humor, flavorful depictions of French cuisine, and a certain je ne sais quoi that keeps ones interest.

When Ella first arrives in Paris, she is full of social faux pas’ and uncertainty. She fumbles through the language, and even encounters a stereotypical French lover. Her character is believable and endearing. And her budding friendship and eventual cheese bet with “Mr. Cheeseman,” is just flat out adorable.

I found myself laughing out loud at certain parts, and also internally cheering Ella on to find her happy ending.

While the plot is fairly predictable, there are a couple of interesting curveballs thrown to readers. The writing, characters, and setting are what make this novel the great read that it is. It’s whimsical and decadent as it transports the reader to Paris and the many delights the city has to offer.

I gave this one a four star rating, and would highly recommend to anyone who wants to escape on a cheesy (quite literally) excursion to Paris!

For my next read, I’m heading off to Paris AGAIN. But this time, to solve a murder mystery!

Death in Paris by Emilia Bernhard is a series debut of two American sleuths in Paris tasked with solving the mysterious murder of a French financier. It has been a good while since I read a good mystery, so I am rather looking forward to it.

What is everyone else reading this crisp October? Anyone escaping to other countries in books or in real life? Or are you sticking with the more traditional, spooky reads? The rest of my October reads have some air of  ‘spookiness,’ to them. So if that’s your thing, stay tuned!

Until next time, book buds!