Raise your hand if you’ve experienced a reading slump over the last month/few weeks?

*adamantly waves hand above my head*

For some reason, I noticed I wasn’t alone in feeling unmotivated to crack open my books and read daily. The majority of my bookstagram friends also mentioned this same overall feeling of despair when the subject turned to bookish relations.

So what is up with that? Is it a result of the seasonal change? The start of a new school year for those of you have cute little kids? Are all my fall/autumn lovers out their preoccupied with creating those ‘perfect aesthetics,’ in their homes and on their insta feeds?

I think it is a combination of those major seasonal/life events, and probably a host of other facts as well.

Because let’s face it, I have no children that vie for my attention. Well, unless of course you count my Reesie pup. And I know all you human rearing Mom’s probably just sighed heavily and eye rolled, but you just don’t know. She thinks she is a human baby, I swear.

Anyway, the point is, I started off this fall season with literal zero motivation to read. I think a lot of it had to do with my stress level & workload increase at work. My boss quit, so yay, my co-worker and I get to split managerial duties on top of all of our day to day stuff. So I think I have been running at full speed so much that it’s burning me out.

I mean, I can’t even tell you how many nights I went to bed at 8:00pm because it’s been nearly every night. This in turn, depresses me because what I really want to do are the things I really love in life like reading.

Not to mention, Emma and I are plowing through the Outlander series with our best friend bookclub. And boy, does it take work keeping pace with her on these. She was born for monster reads, it seems. I, on the other hand, need more variety to my reading schedule. Not that I don’t absolutely LOVE the series and LOVE reading them with her (Emma, don’t feel bad AT ALL if you’re reading this, this is my issue, not yours). Two DG books back to back has been a little much. I’m pretty sure I lifted my hands skyward and sang the Hallelujah chorus when she said she wanted a break between An Echo in the Bone and Written in My Hearts Blood.

So yeah, this month of September has been a total vicious cycle for me as far as goal setting and goal missing.

I am happy to report though that I did finish one (1) book this month! Yay, for seriously small victories! *does a little happy dance* And it was a NetGalley read, so I even felt a little more accomplished than I normally do. 🙂 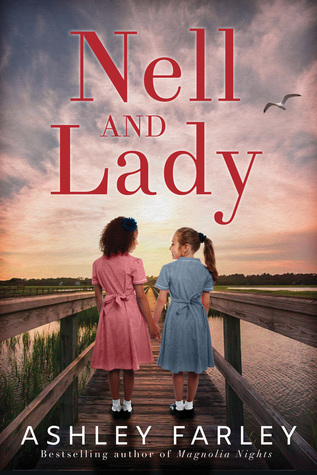 Nell and Lady tells the story of two girls, one white and one black being raised together against the backdrop of Charlestown, SC in the 1970s.

Some horrific act occurs on the night of Lady’s 16th birthday party that alters their lives and their friendship forever. It isn’t until their mother, Willa, is diagnosed with cancer that the two woman’s paths cross again decades later.

Both women are still nursing old wounds they’ve carried within them since that night while attempting to raise their teenage children to be better than themselves.

A tragic twist of fate makes them come to realize the true meaning of family.

I gave this book 2.5 stars. There were quite a few things about it that I just couldn’t get over or that just didn’t resonate well with me.

First of all, the author does make some bold moves to touch upon some major social issues that still pop up in our media today. She takes great care to also throw in some great references to modern day works that all of us in the bookish community and food lovers in general can appreciate. But the problem I had with her highlighting the issues of racism, sexual abuse, adopted families, and many more that I won’t bring up, is that she just touched upon them. They weren’t really explored as fully as they could have been in order to bring about better growth and understanding in these characters. I felt like I wanted more emotional depth as a result.

Another thing is the characters felt a bit stock-ish. Sure, they went through a transformation, but it wasn’t until the last couple of chapters. The main reason for their reconciliation in the synopsis is misleading. And I was surprised that an ailing parent wasn’t enough for these two girls to really get over the past, or at least hash it out, and then try to make the most of the time they had.

The dialogue also felt a bit awkward to me. It was overly formal and explanative at times, which made it sound either cheesy or just cringe worthy. After reflecting on this a bit, I think the author was trying to set a “southern tone,” but if that was the case, I wanted to be transported to the south. I didn’t feel a deep connection to the setting (merely mentioning landmarks in Charleston, to someone who has never been doesn’t really do much), and as a result, the dialogue didn’t always work for me.

Wow. I have been so overly negative in this review. So let me talk about some more things I did like about this.

I really did like that Ashley Farley took “the sins of the past,” and kind of replicated similar issues in the lives of Nell and Lady’s children. Booker and Regan’s story paralleled their mother’s a lot, which made for nice juxtaposition whenever the narrator shifted. Also the fact that they act as the catalyst for a lot of things in this story was a nice surprise that you didn’t get from the synopsis.

I also liked that Booker and Regan stayed strictly friends throughout this. I love an author who can create a male/female dynamic that is strictly platonic. Because hello, it can happen. Their relationship also reminded me a lot about one of my guy friend’s from high school, so I was really drawn to that.

Also, I read something in her acknowledgments that made me feel less bad about not loving this book. Farley took a moment to thank her editor by saying that she was appreciative for becoming a stronger writer from her efforts, but she also was glad she could still sound like herself. Anyone who writes for him or herself first deserves respect in my eyes. I thought to myself, good for her to staying true to herself and her writing.

All in all, I want to thank Lake Union Publishing for the opportunity to read this story. I never read anything in the southern genre before, although I have a quite a few books on my TBR shelf now. I hope this book does the author well. It seems like she has a good following and fan base to date.

Anyone else read Ashley Farley’s books before? Am I totally off base with my review here? How is everyone doing with their reading this fall? Let’s talk if you’re feeling slumpy or just coming out of one!

Until next time, book buds!