Another NetGalley read finished for the month!

In the Midnight Room by Laura McBride was one I got through NetGalley, just because. I honestly didn’t expect when I signed up for the site to be approved for nearly every single read that I requested. It is a lot different than those near impossible Goodreads Giveaways. Seriously has anyone out there won one of those?

But anyone, this one had the earliest pub date (which I missed by about a week) so I went for it. And this one was pretty good. 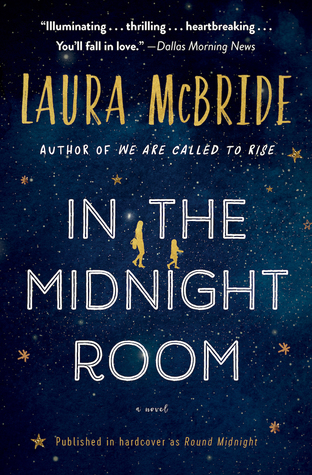 Three women from different decades with diverse backgrounds find their lives intersecting in unexpected ways. All set against the backdrop of Las Vegas and the up’s and down’s that encompass this area.

We first meet June, a free spirited woman who left a small town in Jersey for the bright lights and excitement of Las Vegas in the 1960s. June’s story was intriguing given her aversion to segregation in the casino she ran with her husband. She was a trailblazer, someone who truly didn’t care what people thought of her differing opinions. I found her sections the most enjoyable to read and got through those ones the quickest.

Following June we meet Honorita, a Filipino mail order bride, who ended up striking it rich in America. Her story was tinged with sadness, but her stony exterior made it hard to feel a deep connection to her. Still, I was glad for how things ended for her.

We also have Coral, who isn’t mentioned in the original synopsis, but she has a critical role in the story. I honestly thought her character was more deeply explored than our third protagonist, Engracia. I really enjoyed her familial relations and the scenes she had with her siblings and then nieces and nephews.

And then there was Engracia. While we understand why Engracia was the way she was or acted the did, there was a lot lacking with her character. For as much time as McBride spent flushing out the other three characters, I felt like Engracia’s story was rushed and left the most holes in the plot. I wanted to know more about her.

All in all, McBride created interesting and diverse characters with realistic problems and brought them together in both unexpected and expected ways. Not only do her characters and their lives draw you in, but In the Midnight Room, also touched upon a lot of important issues in America’s history. Alluding to critical events during the Civil Rights movement, and then turning it into a personal struggle for a couple of our primary characters. In addition to racism, this book also mentioned immigration issues, particularly those surrounding sex trafficking and illegal immigration.

The writing wasn’t lush with descriptions, leaving the reader room to interpret scenes to their liking. The style didn’t show much, but rather told the reader about a lot of things the characters experienced. It was also a little introspective at times, jumping back and forward in time. Everything had purpose and meaning and came together in the end, but there were a couple of things that could have been edited out.

The pacing was a little slow at times, but there were moments of suspense that made me want to plow through multiple chapters at a time. I thought this was a solid 3 star read, and I would recommend it if you’re looking for a female oriented drama that spanned several decades and included characters with diverse backgrounds.

What is everyone else reading to close out their summers? I’d love to hear from you!

Until next time bookworms!