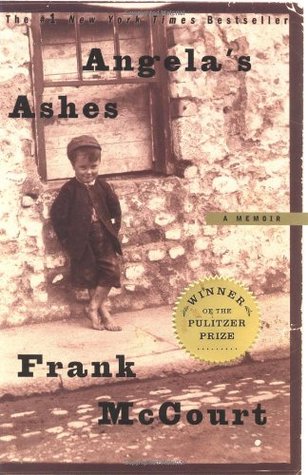 This book held a special meaning to me prior to me even cracking the spine and diving into the first few pages. It was a birthday gift (from last year) from my Belgian bestie, and she was extremely thoughtful in selecting it for me.

Like most American’s, my family was one of immigrants. Although in most cases, I am three generations removed from wherever “the homeland,” was. Even with this in mind, my family is often prouder of our Irish heritage than of any other. Probably because our name has survived, and that part of my family is the most vibrant and exciting. No offense, to my Mom’s family.

Anyway, she chose this book knowing of my interest in learning more about “my people,” and the struggles they might have faced. Unlike Frank McCourt’s family, my great-grandparents remained in America during The Great Depression, and after reading this I’ve started to wonder what would have happened if they went back to Ireland? It was apparent McCourt wondered something similar as far as if his family would have stayed in America.

I’m not trying to pretend to have a similar experience to him at all. My childhood was uneventful, sheltered, and happy. Whereas McCourt’s was chaotic, harsh, and even at times tragic. But I couldn’t help but feel a sense of kinship with him on some level as I read this story.

The aspects of growing up in poverty I cannot relate to. Thankfully I never experienced a parent with a substance abuse problem that thrust us into poverty. We are historically a family of drinkers, and I am always diligent in monitoring just how much we imbibe for the above reason. While my experiences with this are on an infinitesimal scale, my heart went out to Frank’s family whenever his father was on one of his binges.

And then there was the harshness of being Catholic and coming from an Irish Catholic family. Yes, even seventy or eighty years later, I still feel the weight of Catholic guilt and teachings that are kept alive in my part of the world today. Going to a Catholic school, being mentally ridiculed (I think they banned the physical ridiculing after McCourt’s time), and basically always believing you were destined for hell, along with having a larger family and constantly being involved in their business.

McCourt makes the gravity of these situations almost comical. Because well, they are. Anyone who has been belittled or punished at the hands of church officials can relate to the ridiculousness of their teachings at times. If you’re looking for opportunities to be amused by Catholic-ism’s, you surely won’t be disappointed by what you find here.

I also really enjoyed McCourt’s writing style. He begins telling it with the innocence and curiosity of a young child, and his voice matures as he grows up in the novel. He has a way of seamlessly blending external actions and dialogue into internalizations of his personal experiences.

He questions a lot of what takes place in his life, posing simple solutions to grave issues. And I suspect that is a coping method, given the circumstances in which he was brought up.

All in all, this was a great read. I’m not usually one for memoirs, but I felt this one was special. I gave it four stars, and would highly recommend to anyone looking for a real life story of triumph in the face of adversity.